Nisaa Jetha is currently the Director and Head of Global Impact, ESG & Sustainability at UMusic Hotels (the joint venture between the world’s largest music group, Universal Music Group and Dakia U-Ventures (DUV) alongside the Director of Impact at Alder Fuels (subsidiary of Dakia Energy). Alder Fuels, was launched at a highly publicized White House Event in 2021 and responsible for the largest sustainable fuel agreement in aviation history with United Airlines & Honeywell (both investors) looking to decarbonize our skies.

Nisaa is a qualified solicitor of England & Wales with private equity experience across impact curation, ESG, SDG metric build out across mid-cap PE portfolios (USD 15-100 mil) previously ranking as most senior ESG officer across a portfolio that spanned three nations.  She is the Curator of ImpactforSDGs, and the Global Ambassador for Climate Change at the Centre for Responsible Leadership (alongside Al Gore’s VP Nominee Senator Lieberman) partnered with President Bill Clinton & John Hopkin’s University. Nisaa is part of 100Women@Davos, was a Keynote Speaker at COP26 (openCOP) & selected as a Guide at The Resolution Project. She has been a Contributing Writer for Arianna Huffington’s Thrive Global and Entrepreneur.

Nisaa launched an energy governance group in the highest house of UK Parliament (2015) hosted by Under-Secretary of State for International Development & Climate Minister through the membership organisation she founded JCI (p.o.). JCI has global affiliations with the Council of Europe, Economic and Social Chamber of the UN & International Chamber of Commerce. Nisaa was a pioneer and structured the organisation around the SDGs later invited alongside 150+ Heads of State to the global adoption of the UN SDGs (2015).

Instrumental in curating a focus event at COP21 (Paris Climate Accord), and speaker in UK Parliament on increasing female representation in politics & International governance, she has also worked as a policy analyst and speech writer for Canada’s previous Special Envoy to Sudan inside The Senate of Canada and awarded the Ambassador for Peace Award (UPF), and nominated by the United State of Women Summit hosted by The White House.

Selected by UN Women to curate one of the global 92Y Genius Panels (MSNBC gathered 32 world shakers) on Google Campus, Nisaa was part of one of the only global working groups for youth and gender equality with the United Nations (UN Women).

Nisaa Jetha was ranked within the Top 20 Impact & Sustainability Leaders across Europe as a successful local founder who leads the ecosystem by the Founder Institute. In total, Founder Institute Alumni are worth an estimated $30BN and produced around 1,300 companies including Udemy, Kindara, and Zirtual. 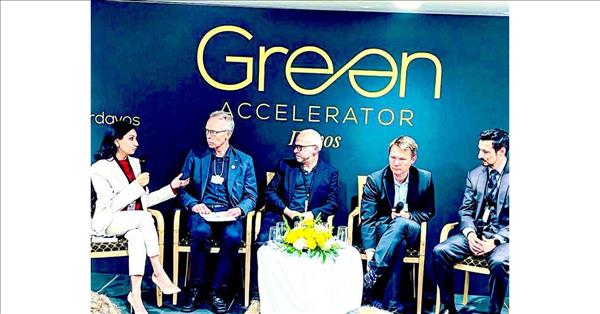 She was awarded the Ambassador for Peace Award (UPF) and separately nominated by the United State of Women Summit hosted by The White House. Nisaa was asked to represent the United Kingdom at the United Nations through the membership organisation she launched in UK Parliament. She was also selected to advise key UN officials on a private Braintrust for scaling peace and restorative justice models to catalyse community development and climate change solutions. She is part of a 100 Women at Davos (World Economic Forum), launched at Davos on January 2020 for C-Suite women working towards participation in leadership at all levels of decision making. Members include Dr. Ngozi Okonjo-Iweala the current Director General of the World Trade Organisation.  Nisaa is currently the Climate Change Ambassador (Youth Development & Women’s Economic Empowerment) of The Centre for Responsible Leadership (Leadership Team includes Al Gore’s Vice President Nominee Senator Lieberman).

Ranked within the Top 20 Impact & Sustainability Leaders across Europe as a successful local founder who leads the ecosystem by the Founder Institute.

Nisaa Jetha has been referenced, cited and/or profiled in the following media for her work across international relations, global governance forums and her international speaking engagements. United Nations Inter-Governmental Organisation (IGO). Nisaa is Director (Board of Directors) on a United Nations Inter-Governmental Organisation, The Be Earth Foundation (Be Earth). An IGO is comprised mainly of sovereign states or other IGOs, like the World Health Organisation (WHO), The World Bank, and other global actors. IGOs are involved in treaty making and often have international legal status which bind the IGO and its Member States under international law. IGOs differ from NGOs in that they work at the highest level of government with Heads of State. Be Earth advises, assists and enables in the implementation of the Sustainable Development Goals (SDGs) on behalf 12 countries with which it has Treaties.

Nisaa Jetha is a solicitor of England & Wales with private equity experience operating as in-house counsel for investment funds in emerging geographies. She also has experience advising on pro-bono matters across the charity space with a particular focus on climate change, sustainability, ESG and impact. She is a current member of the legal network of social impact.

Nisaa was a previous Global Expert and on the Impact Committee of Consilience Ventures one of the first tokenised venture-capital funds where she advises and supports their portfolio companies and recommends investment opportunities.  She also consults for other funds/ PE managers across impact advisory strategy.  Nisaa has private equity experience across emerging markets with public market exposure and has curated global impact strategy, benchmarked the United Nation’s SDGs across mid-cap private equity deals and headed departments inside FCA regulated investment managers across Impact and ESG. She has been the highest ranking Environmental and Social Management System Officer (managing ESG)  across a portfolio of USD $150 million across three separate geographies designated by the International Finance Corporation (World Bank Group).

THRIVE GLOBAL– Thrive Global  seeks to raise awareness and create real and tangible  solutions to help individuals, companies and communities improve their well-being and performance to unlock their greatest potential.

Nisaa Jetha was an Editorial Contributor for Huffington’s Thrive Global, see a piece of her work found here. Nisaa Jetha Co-Launched Africa’s Alternative Energy Summit & Exhibition Inside United Kingdom’s Parliament (House of Commons) in 2015 as Community Director (London) of the Junior Chamber of Commerce (JCI). JCI has global affiliations with UNESCO, Council of Europe, Economic & Social Chamber of the United Nations and in a World Partnership with The International Chamber of Commerce.[/caption] Nisaa Jetha as Key-Note Speaker at the Institute of Directors alongside UN Women on International Women’s Day (March 2016). Nisaa  addressed a closed group on global governance and the Sustainable Development Goals (SDGs).

Nisaa Jetha moderated inside United Kingdom’s Parliament (House of Lords) October 2019 on Brexit and Continued Financing of Disruptive Technology in Africa. Select panelists were Justina Mutale (acclaimed as one of the most influential women of African origin), Her Excellency Marie Ndjeka Opombo (Ambassador of the Democratic Republic of Congo), The Right Honourable Lord Anthony Tudor St John of Bletsol (House of Lords). Nisaa Jetha selected to advise and lecture at the International Strategic Alliance Committee alongside UNESCO. Nisaa Jetha presented her strategy on Energy Governance and SDG 5 to various Government Ministers and Dignitaries.

Nisaa Jetha Addressed A Closed Panel Inside The House of Lords (UK Parliament) on Increasing Female Leadership In Political Systems 2016. Nisaa Jetha Launched an Energy Governance Group Hosted by then The Parliamentary Under-Secretary of State for International Development in The House of Lords (UK Parliament) 2016 in her Personal Capacity.